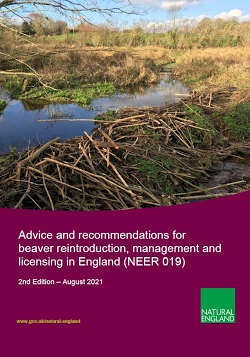 In August 2020, the UK government announced that beavers on the River Otter in Devon could remain and expand their range naturally. This milestone was reached after the successful conclusion of a five year trial reintroduction of wild-living beavers on the River Otter. A decision is now needed on the future of beavers more widely in England.
Based on a review of research and experience in the UK, Europe and North America, Natural England provides this advice to help inform the government’s decision on the future of wild-living beavers in England, and to meet the ambition set in the 25 Year Environment Plan to reintroduce this species.

It is Natural England’s advice that future beaver releases in England should focus on maximising the benefits that beavers can bring and minimising risks or negative impacts to land use, infrastructure, other environmental features or livelihoods. Any further releases need to comply with Defra’s Code for Reintroductions and Other Conservation Translocations in England, which is based on international guidelines.

Natural England recommends Approach 2. This will allow the positive changes resulting from the presence of beavers to be realised and allow habitats and species to adapt to the presence of beavers. A measured pace will give people time to get used to living alongside beavers and maximise the chances of success by providing the opportunity to address evidence gaps, together with building knowledge and capability to manage negative impacts.