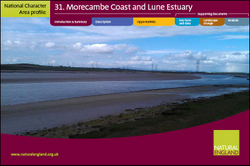 The Morecambe Coast and Lune Estuary is a relatively small and low-lying National Character Area (NCA) bordering Morecambe Bay. It includes areas of high population in the towns of Heysham and Morecambe and the City of Lancaster, but also encompasses areas of high tranquillity, particularly around the Lune Estuary and westwards along the Pilling Coast. Its distinctive identity is strongly linked to the coastal environment along its margin with Morecambe Bay, and inland through the estuaries of the Lune and the Keer. These are nationally and internationally designated as Sites of Special Scientific Interest, Special Area of Conservation, Special Protection Area and Ramsar site for their coastal habitats and the wildlife that they support, including salt marshes, intertidal reefs, and wader and waterfowl populations. There is a longstanding cultural link to the coastal environment through fisheries, trade and tourism.
Away from the coast and urban areas, the landscape is mainly one of pastoral agriculture, including dairy, which varies in character from reclaimed grasslands bounded by wet ditches in the lowest-lying areas to a hedged landscape including frequent boundary trees as the land begins to rise. Towards the boundary with the adjacent upland NCAs, and where drumlins are present providing abundant field stone, stone walls start to predominate. To the north and west the NCA is framed by areas of higher ground, including the Lake District Fells and Bowland Fells.
Further information