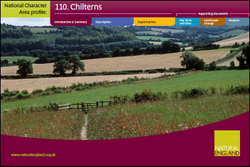 The extensively wooded and farmed Chilterns landscape is underlain by chalk bedrock that rises up from the London Basin to form a north-westfacing escarpment offering long views over the adjacent vales. From the vales, the River Thames breaches the escarpment in the south at the Goring Gap and flows on past riverside towns such as Henley. Small streams flow on chalk down some of the dip slope valleys or from the scarp foot, passing through numerous settlements. The major sources of public water supply for the Chilterns and the London area are the chalk aquifer and the Thames.
The countryside is a patchwork of mixed agriculture with woodland, set within hedged boundaries. Furthest from London, the natural and built features of the countryside are recognised as special and attractive in approximately half the National Character Area (NCA) by the designation of the Chilterns Area of Outstanding Natural Beauty (AONB) and, in a small area south of the River Thames, by the North Wessex Downs AONB. Outside the AONBs there are major settlements that incorporate extensive urban fringe and growth areas, including Luton, Hemel Hempstead and High Wycombe.
Further information