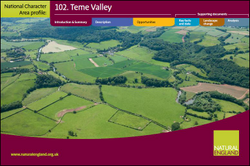 The Teme Valley National Character Area (NCA) lies primarily in northwest Worcestershire, but also extends into the counties of Shropshire and Herefordshire. The River Teme, which gives its name to this NCA, is nationally important for nature conservation. The undulating, deeply tranquil valley formed by the River Teme flows west to south, meandering its way through from the Herefordshire Lowlands and beyond before flowing into the Severn and Avon Vales. The tranquil, rural character pervades the area, which has largely escaped the pressure of modern development and retained much of its historical built character in dispersed settlements, small villages and traditional buildings.
Composed of Silurian limestones and siltstones and capped with Permian Haffield Breccia, the Abberley Hills at 270 m elevation are the most conspicuous landscape feature, forming a visual continuation of the north–south Malvern Hills ridge. The lower land, a complex undulating landscape with rich red soils, gives rise to fertile farmlands dissected by the River Teme. The area is a mosaic of mixed agriculture, cultivated in places but less improved on the steeper slopes. Farmsteads are predominately medium to large scale although higher densities of small-scale farmsteads and smallholdings are associated with areas of enclosed common and woodland. Timber-framed buildings, dating to as early as the 12th century, hop yards, hop kilns and cider houses are characteristic of the area.
Further information