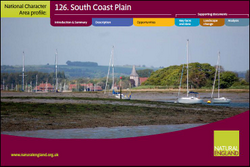 The South Coast Plain National Character Area (NCA) is a flat, coastal landscape with an intricately indented shoreline lying between the dip slope of the South Downs and South Hampshire Lowlands and the waters of the English Channel, Solent and part of Southampton Water. The coastline includes several major inlets which have particularly distinctive local landscapes and intertidal habitats of international environmental importance for wildfowl and waders. Chichester Harbour Area of Outstanding Natural Beauty lies within the NCA and the foothills of the South Downs, along the northern boundary, fall within the South Downs National Park.
Some three per cent of the area is designated as a Site of Special Scientific Interest, and there are four Special Protection Areas, two Special Areas of Conservation and four Ramsar sites: Chichester and Langstone Harbour, Pagham Harbour, The Solent and Southampton Water and Portsmouth Harbour.
Further information