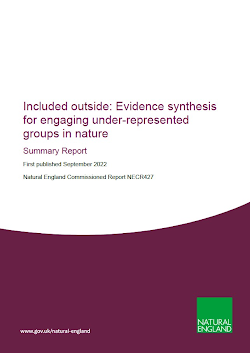 This summary report is part of the Natural England ‘Included outside’ publication series, produced by an expert team at the University of Sheffield to bring together existing evidence based on a review of a range of published sources on nature access and engagement by under-represented groups. The summary report provides an overview of the methodology used in the review that informed all the publications in the series. It also provides a summary of the key barriers across the four social groups (people from ethnic minority backgrounds, older people, those living with disabilities, and those living in lower income areas), which are each the subject of one of the four evidence briefings also published as part of this series.

The cross-cutting barriers identified include:
• a lack of nearby quality greenspace;
• personal safety concerns;
• a lack of partnership working with organisations run by or with under-represented groups;
• limited supportive infrastructure (such as toilets or picnic spaces) that aim to build nature space confidence and routine use.

The report briefly summarises the more limited evidence on what works, including highlighting the potential of micro nature spaces as ‘stepping stones’ to nature engagement. Strengths and weaknesses of the existing evidence base are also identified, such as the relative lack of quantitative and mixed methods studies.

This is an Excel workbook that lists the relevant evidence sources found in the review search for Natural England’s ‘Included outside’ publications series, not all of which are specifically referenced in the evidence briefings and the summary report. It comprises a range of sources including academic research, policy papers, think pieces and reflections on personal experiences. It was compiled by the expert team at Sheffield University as a result of the review they conducted to produce the four evidence briefings on inclusive nature engagement.