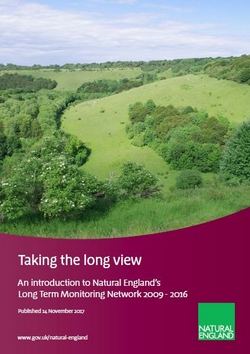 Natural England’s Long Term Monitoring Network project (LTMN) began in 2009 with the aim of developing, with our partners, a cost effective network of sites to provide evidence on the effects of changing climate, air pollution and land management on the natural environment. It is a set of intensively monitored sites across England, selected to cover the whole country and to include some of our most valuable habitats. LTMN extends and complements the UK Environmental Change Network (ECN) which was established in 1992.

LTMN (and ECN) measure multiple attributes on individual sites using standard protocols. This approach will enable us to draw stronger conclusions from a smaller number of sites than if these measurements were collected through separate, broad surveillance schemes. LTMN has 37 fixed sites across England. It covers ten target habitats and similar habitats can be compared in areas with contrasting climate and pollution conditions. In 2016 we completed all the baseline surveys and will now be comparing data sets over time. Most of the data collected are already openly available for others to analyse and use under an Open Government Licence.