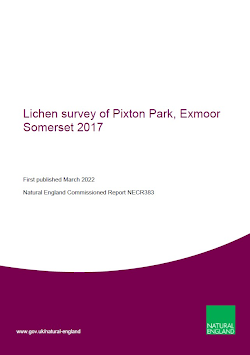 Past Survey: the lichen assemblage of Pixton Park was first surveyed by the Exmoor Woodland Lichens Survey in 1986 and 1987. This surveyed all the woods in the Pixton area but found the woodland and open parkland with ancient trees within Pixton Park to be particularly rich in epiphytic lichens. They recorded a total of 128 lichen taxa from the park and Steart Wood. The Southern Oceanic Woodland Index (SOWI), an index using indicator species to evaluate sites, score for their data was 34, a high total indicating a site of high nature conservation importance for lichens.

Current survey: Neil Sanderson, Botanical Survey & Assessment, was contracted by Natural England to carry out the lichen survey of Pixton Park. The purpose of the survey was to provide a baseline for evaluation of possible SSSI status. The survey divided the area into four recording compartments determined by land use history. In these compartments all lichens encountered within the boundaries of Pixton Park and Steart Wood were recorded to a six figure grid reference, but with only the first instance of common species recorded. Further occurrences of species of interest were recorded at least to at least six figure grid reference accuracy and a selection of the most significant species had their distributions fully mapped by recording each occurrence as GPS waypoints. For the Red Data Book species encountered the tree was also photographed and for some macro-lichens the lichen population was also photographed. The primary aim was to be able to map out the lichen interest and relate this to habitat conditions and management requirements.