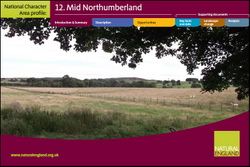 Mid Northumberland is an intermediate plateau of gently undulating farmland which forms a transitional area between the Northumberland Sandstone Hills to the west and the low-lying coastal plain to the east. A series of ridges and enclosed river valleys in the northern part of the area open out into a broader, flatter landscape in the south. Hadrian’s Wall World Heritage Site forms the southern border to the National Character Area (NCA).
The area is dissected by several small rivers which flow eastwards to the sea. The River Coquet flows down from the Cheviots, while the rivers Font, Wansbeck and Blyth and their tributaries wind down from the sandstone hills and upland pastures through wooded valleys and lowland arable areas. Within this predominantly farmed landscape there are many small woodlands and shelterbelts, and a few areas of open water, relatively infrequent within Northumberland.
Further information