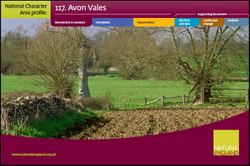 This is an undulating, low-lying landscape of mixed, predominantly pastoral agriculture and small limestone-built towns, cut by the (Bristol) River Avon and its tributaries, and surrounded to the west, south and east by higher land. Woodlands lie on the steeper slopes and by watercourses, and in a few other areas within a structured farmland of medium to large fields and now straggly hedgerows. It is more than 80 per cent agricultural (both arable and pasture, with some localised nurseries and market gardening) and less than 10 per cent urban, but from the late 20th century onwards it has been subject to much development. There is evidence of Saxon occupation in the many ‘–ham’ place names, and there are prehistoric hill forts, with extensive areas of ridge and furrow that indicate medieval arable cultivation. This area still reveals its past role in broadcloth production and trade in its fine late medieval churches and merchants’ houses in market towns and in its many stream-side mills. Smaller settlements and farmsteads are clustered along streams and lesser rivers, linked by narrow winding lanes. Ancient patterns of flood meadows and drainage ditches dominate these valley floors, with their wet grasslands and woodlands. Flooding affects many communities in this National Character Area (NCA), and the opportunities to restore wetland habitats within river corridors to alleviate problems with water flow and to aid climate change mitigation will be important ecosystem services here, to add to food provision and cultural services.
Further information