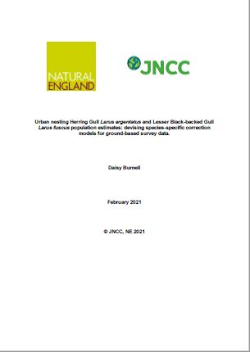 This report summarises survey methodologies and the analysis and modelling to produce correction factors with which to then use in calculations to produce current breeding population estimates for Herring Gull (HG) and Lesser Black-backed Gull (LG) in England. Survey methodologies for ‘Seabirds Count’ differ greatly from the ‘vantage-point’ methodology used for ‘Seabird 2000’, which was subsequently discovered to be unreliable (Coulson & Coulson, 2015). Ground-based surveys (GBS) and digital aerial surveys (DAS) 2018 – 2020 were performed to find suitable conversion factors to account for detectability issues with GBS. Different combinations of environmental predictors, such as urban fabric type and proportion of urban coverage in survey squares (PROP), were used in ten candidate models. At various stages of analysis, a number of statistical, graphical, modelling and verification tools were employed. This study found the strongest count type relationship was between DAS ‘apparently occupied nests’ (AON) and GBS ‘individual adult gulls present on suitable nesting habitat’ (IND). This relationship improved with inclusion of environmental variables and validation tests on conversion models for HG and LB indicate good fit. However, weaknesses exist in the ability of these models to adequately predict lowest and highest nesting densities for both species, particularly LB, and some small sample sizes of squares with certain physical and gull population characteristics was an exacerbating factor. A number of recommendations for improvement are presented.