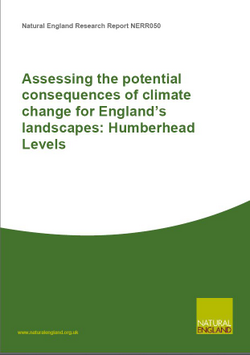 This study, which was undertaken in 2010, considered the vulnerability of the natural environment to climate change in the Humberhead Levels National Character Area. It was one of a series of studies carried out by Natural England to explore the potential consequences of climate change for the natural environment across England and to consider appropriate adaptation options. The Humberhead Levels is a broad floodplain at the head of the Humber Estuary; a largely agricultural area containing a number of important rivers flowing into the estuary and wetlands associated with them, and nationally important areas of lowland peat bog.

The vulnerability of the natural environment in the Humberhead Levels NCA was assessed by
considering how exposed it is to changes in climatic conditions, how sensitive it is to those changes (including its ability to adapt, which can be influenced by its current condition), and how much scope there is for conservation management to promote adaptation. This assessment of vulnerability was based on the best available scientific knowledge of how climate change might affect the natural environment and discussions with local experts. The assessment considered both landscape assets (biodiversity, heritage, soils and geology) and its ecosystem service functions.