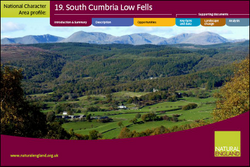 The South Cumbria Low Fells is an internationally recognised landscape,two-thirds of which is covered by the Lake District National Park designation.To the east the area extends to cover the River Lune valley. The area lies to the south and south-east of the central core of the Lake District (the Cumbria High Fells NCA), but the sudden change from the tough Ordovician Borrowdale Volcanics to the softer Silurian slates and mudstones provides a dramatic change in landscape: the rugged high fells give way to gentler undulating hills, dissected by pastoral river valleys, woodland and linear lakes. Some 51 per cent (35,776 ha) of the area falls within the Lake District National Park, while 2 per cent (1,155 ha) falls within the Yorkshire Dales National Park, which borders the NCA to the east.
The area stretches from above the Duddon Estuary, in the west, through the wooded hills and valleys of Broughton in Furness, the River Crake and the Furness Fells, through Grizedale Forest to Coniston Water, Windermere and Whinfell Forest, to more undulating farmland in the east. It is characterised by undulating low fells and ridges which, in the central section, are dissected by the two major lakes – Windermere and Coniston Water – and minor river valleys. Windermere is the largest lake in England and an iconic feature of the Lake District, heavily used for recreation and tourism. In the east – the area not covered by the National Park designation – the landscape is characterised by open, semi-improved pasture on a plateau between the rivers Kent and Lune, with a shallow relief of ridges and hollows.
Further information