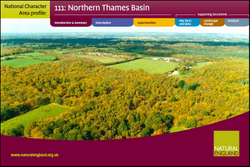 The Northern Thames Basin is a diverse area which extends from Hertfordshire in the west to the Essex coast in the east. It is separated from the North Sea and Thames Estuary by a narrow band of land that makes up the Greater Thames Estuary National Character Area (NCA). Included within this NCA are the suburbs of North London and also historic towns and cities including St. Albans and Colchester, as well as new and planned towns such as Welwyn Garden City, Hatfield and Basildon. Although arable agriculture is a large industry in
the area the soil quality ranges from good to poor quality. The London Clay provides a poor quality soil that becomes waterlogged in winter and cracks and shrinks in summer. Better quality soil is found in areas that contain alluvial deposits from the Thames and other rivers in the area as they formed and changed position over time.
The Northern Thames Basin is an area rich in geodiversity, archaeology and history and diverse landscapes ranging from the wooded Hertfordshire plateaux and river valleys, to the open landscape and predominantly arable area of the Essex heathlands, with areas of urbanisation mixed in throughout. Urban expansion has been a feature of this area since the 16th century when wealthy merchants who were conducting business in London built homes on its outskirts, mainly in the Hertfordshire area. This trend increased dramatically from the mid-19th century as infrastructure improved and people could travel to work in London from the surrounding areas in an hour or less. This has put increased pressure on the area in terms of extra housing developments, schools and other necessities for expanding populations, with a consequential reduction in tranquillity.
Further information