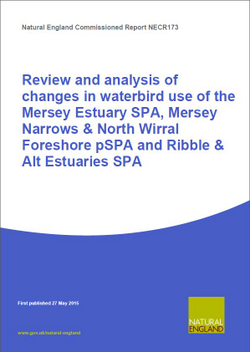 The rivers Ribble, Alt, Mersey and Dee form major waterways and estuaries draining into Liverpool Bay. The entire area is important for bird life, and has various levels of protection. Several sites are classified as Special Protection Areas (SPAs), including the Ribble and Alt Estuaries SPA, the Mersey Estuary SPA and the recently designated Mersey Narrows and North Wirral Foreshore SPA.

This report analyses water-bird use of these protected sites, which together form part of a chain of SPAs on the northwest coast of England, fringing part of the eastern Irish Sea. Many wintering water-birds move readily between the three SPA sites considered in this report and other SPAs in the region such as Morecambe Bay and Martin Mere.
One of the core duties of Natural England is to ensure protection and management of sites (which have been given special protection under the European Union’s Habitats Directive), that provide increased protection for habitats, birds, plants and animals and are a vital part of global efforts to conserve the world’s biodiversity.

The aim of the work is to provide an analysis of the water-bird usage for each of the Wetland Bird Survey (WeBS) sectors in the Liverpool City Region in order to underpin and strengthen Natural England’s statutory conservation advice. This advice will then be used to assess the potential impacts of activities and developments on the designated features.