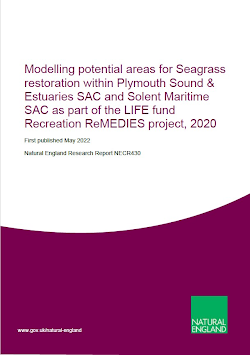 This work was undertaken with the aim of developing a novel modelling approach to inform the restoration of Zostera marina seagrass habitats within the Plymouth Sound and Estuaries (hereafter Plymouth) and Solent Maritime (hereafter Solent) Special Areas of Conservation (SACs) on the South coast of England.

A Species Distribution Model (SDM) developed by the authors was used to explore the environmental characteristics of locations with existing seagrass beds at each site and used to predict the suitability of other areas for restoration. The eventual aim of the project was to restore an area of Z. marina approximately 4 ha in size in each of the SAC’s.

Key findings from the modelling were:
o Overall, the predictions from the model showed good agreement with existing seagrass locations and were biologically sensible despite having a fairly low explanatory power
o Bathymetry had the strongest effect on the distribution of Z. marina for the Solent. Depth defines sediment characteristics and light availability, two important factors for successful seagrass colonisation
o A number of variables had moderate effects in the model for Plymouth with relative wave exposure and turbidity being the most ecologically meaningful
o The relationship between probability of seagrass presence and wave energy was complex. For Plymouth, only sheltered sites supported seagrass but in the Solent, moderate to high exposures were tolerated. Relative wave energy values from WEMo were higher overall in the Solent than in Plymouth

The above findings highlight the importance of considering habitat suitability on a site-by-site basis.