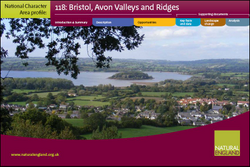 The Bristol, Avon Valleys and Ridges National Character Area (NCA) encompasses the City of Bristol with its historic port, and the surrounding area including the Chew and Yeo valleys, Keynsham, Clevedon, Portishead and parts of the Cotswolds and Mendip Hills Areas of Outstanding Natural Beauty (AONB). The area is characterised by alternating ridges and broad valleys, with some steep, wooded slopes and open rolling farmland. It is flanked by the Somerset Levels and Moors and the Mendip Hills to the south, the Cotswolds to the east and the Severn and Avon vales to the west, which largely separates it from the Severn Estuary except for a small stretch of coastline between Clevedon and Portishead. It has a complex geology, being rich in geomorphological features such as the dramatic Avon Gorge, and there are many designated exposures and rich fossil beds. The varied settlement pattern has been influenced by the geology and geomorphology and the expansion of the City of Bristol at its centre. The M5 motorway runs up the western edge and the M4 skirts across the north of Bristol, with Bristol Airport to the south. Although the urban area covering this NCA is significant at over 21 per cent, much of the surrounding rural landscape is farmed.
Further information