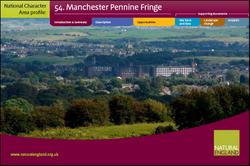 The Manchester Pennine Fringe occupies the transitional zone between the open moorlands of the Dark Peak and Southern Pennines, and the densely populated urban conurbation of Manchester. The area wraps around Manchester from Bolton in the north-west to the edge of Hazel Grove in the east, and includes the industrial towns of Bury, Bolton, Rochdale, Oldham, Dukinfield and Glossop.
This transitional area runs along the edge of the Millstone Grit of the Pennine uplands, and is underlain by Carboniferous Millstone Grit and the Pennine Coal Measures, which broadly dip to the south-west. The area owes much of its character to its proximity to the adjacent Pennine moors, and the deeply incised, steep valleys that characterise the transition from moorland to urban area. The elevation of the area is generally between 100 m and 300 m, between the lower plains and higher Pennine moors.
Further information