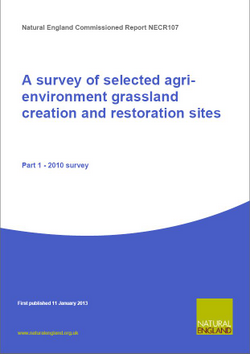 Species-rich grassland is one of the glories of the English landscape. Having shrunk in extent by some 98% through the mid 20th century its protection became, from the outset of agri-environment schemes in the 1980s, a prime objective.

In the 1990s the agri-environment Research & Development programme began to find out how species-rich grassland can be re-created and restored. Research showed that grassland with a very wide range of species can be created on arable land, or restored from agriculturally improved grassland provided sufficient gaps are created for seed establishment. It also showed that almost all species-rich grassland is on soils low in available phosphorus and/or with other stress factors limiting competition from vigorous species.

These findings began to be fed into Classic Scheme delivery from the 1990s but in a limited way. When Environmental Stewardship was introduced in 2005 a much more targeted and pro-active approach was taken in the Higher Level Scheme with specific options for creation (HK8) and restoration (HK7) of species-rich grassland of BAP Priority quality.

This project was initiated in August 2010. The main driver was to find the best examples of creation and restoration so that we could demonstrate how close it is possible to get to the target habitat, in what timescale. We also hoped to identify the key ingredients for success.