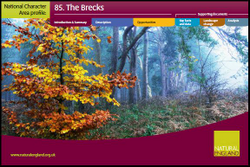 The Brecks National Character Area (NCA), also known as Breckland, lies at the heart of East Anglia, occupying much of south-western Norfolk and northwestern Suffolk, together with a small part of north-eastern Cambridgeshire. The area has an ages-old identity, a very particular land use history and a richly distinctive wildlife, which sets it apart from all surrounding landscapes.
Its underlying chalk geology has produced a low, gently undulating plateau, largely covered with sandy soils of glacial origin. The Brecks is sandwiched between the more fertile, and more wooded, clayland plateau to the north, east and south, and the level drained peat and silt fens to the west, which the main rivers, the Little Ouse, Wissey and Lark, drain into.
Further information