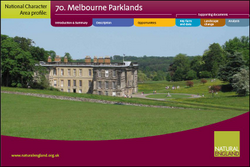 The Melbourne Parklands NCA is located between the ancient forests of Needwood and Charnwood. The Trent Valley forms its northern and western boundary, in a wide arc sweeping round from its confluence with the River Soar in the north-east, to Burton-upon-Trent in the south-west.
It is a landscape of rolling farmland, ancient and plantation woodland and, as the name suggests, a cluster of landscaped parklands with grand country houses, one of which, Calke Abbey, boasts a Grade II* listed historic park and garden. The park has also been designated a National Nature Reserve (NNR), and contains many notable ancient and veteran trees. One-quarter of the NCA is within The National Forest and 10 per cent is woodland.
The NCA is predominantly rural, although there are strong and often abrupt contrasts with the urban areas on its peripheries. The M1 and A42 cross the NCA and East Midlands Airport is sited on the central plateau in an otherwise undulating area.
Further information