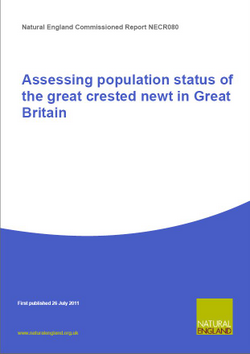 The great crested newt is strictly protected under EU and domestic legislation. The government is required to undertake surveillance to assess the status of the species, in terms of population, range and habitat. Recent attempts at assessing population status have been hampered by problems with survey data, in terms of coverage, age, resolution and the fact that most survey data are not collected in an effort-related manner. Problems have also arisen with determining which units (or “metrics”) to use to describe population status.

Here, the contractors sought to review existing information and develop new approaches to data analysis. The project focused on trialling modelling approaches, given that only a very small proportion of ponds has been reliably surveyed for great crested newts. Such a strategy was thought worthwhile as developing predictive methods could overcome the problems associated with patchy coverage.