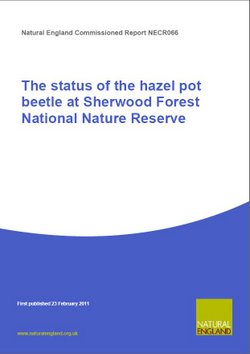 The hazel pot beetle Cryptocephalus coryli is a UK BAP Priority Species and is classified as a Red Data Book category 1 species, being considered rare and endangered in the UK. Its rediscovery at Sherwood Forest National Nature Reserve (NNR) in 2008 after an absence of 70 years prompted Natural England to commission a programme of intensive survey work.

A healthy breeding population of the beetle was confirmed to be present in a sheltered and sunlit area of heath-grassland and scrub adjacent to stands of birch woodland.

The findings published in this report are being used to review the conservation management of the NNR to take into account the presence of this species and to prioritise action for its long-term conservation.

These project findings also contribute to a number of actions identified in the original UK BAP Species Action Plan for Cryptocephalus coryli and are being published so they can inform the conservation plans for other populations of this beetle.