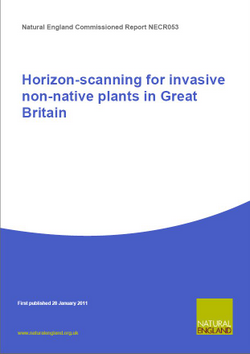 In May 2008 the GB Strategy for invasive non-native species (INNS) was launched. One of the key elements of the strategy was a recognition of the need to prevent the introduction and/or spread of potentially invasive non-native species. Determining which species will become invasive is notoriously difficult, the best predictor being evidence of invasiveness elsewhere. To assist in the prioritisation and targeting of prevention work, Natural England sought a horizon-scanning exercise to identify non-native plants that are most likely to become invasive in Great Britain in the future.

The aim of this report is to produce a list of potential new invasive non-native plant species in Great Britain using existing information on INNS. These might be species which are already here but are not established or species which are yet to arrive. It is envisaged that such a report will stimulate debate and help inform the targeting of resources.

A total of 599 non-native plants were assessed. Complete screening scores for all plants assessed are provided in Appendix1: click here for further details.