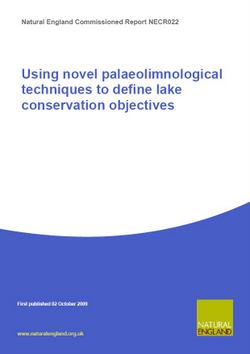 Palaeolimnology reconstructs the history of lake environments through the study of sediments and remains of plants and animals. Where conditions allow, it is possible to reconstruct the environmental history of a lake and identify major changes which can then be linked to known events in the surrounding catchment (e.g. major land use change).

It is also possible to determine the character of the lake prior to major human impact. This is known as the ‘reference’ condition. Defining reference conditions for a given lake is an important part of defining future conservation objectives (though the two may not necessarily be the same).

The work described in this report uses a range of indicators (plant remains, zooplankton remains and diatoms) to reconstruct the history of selected lakes. In particular the research investigated a recently developed method to identify preserved stonewort ‘oospores’ which are particularly abundant in the sediments of marl lakes.

The results of this work will be used to help define conservation objectives for the sites studied and will provide clues as to the cause of changes and deterioration.