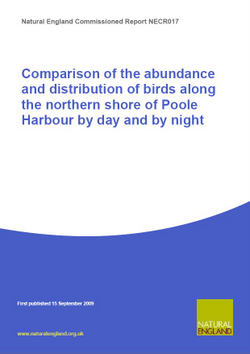 Most surveys of overwintering shorebirds eg the Wetland Bird Survey (WeBS) are conducted during the hours of daylight. Our understanding of the relative importance of areas of intertidal habitat, based on daytime observations, may not represent their relative importance at night particularly as human activity in the day may reduce bird numbers in areas that are otherwise highly suitable and are used extensively at night when human activity is reduced.

When assessing the impact of plans or projects on the bird interest features of designated sites there is a risk that the apparent impact on areas of the shore which are little used by birds during the day may underestimate the actual impact if birds use the areas in question more at night.

The northern shore of Poole Harbour has been heavily developed and is under considerable human pressure. An analysis of WeBS data has revealed that bird numbers along many sectors of this shoreline are lower than expected for the available area of intertidal habitat.

This study was commissioned to compare bird abundance and distribution during the night and the day. In particular the aim was to identify any areas of the northern shore of Poole Harbour which are used more at night than in the day.