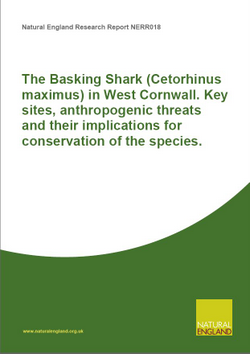 The Wildlife Trusts Basking Shark Project conducted six years of effort corrected line transect surveys in the waters of South Devon and Cornwall between 1999 and 2004 to establish key sites for the basking shark. The report sets out the results achieved by the study over the six-year period, and examines the factors influencing shark selection of these key sites, the long-term conservation implications of that site selection, and recommends practical initiatives to safeguard the sharks within those key sites, where necessary.

This study set out to examine whether the key sites established were consistently important, not just during a cyclical period of high levels of surface sightings, but also during a low period in the cycle when fewer sharks were sighted. Emphasis was also placed on establishing the incidence of behavioural activity such as courtship and breaching, consistent with reproductive activity. The study sought to identify potential threats of an anthropogenic nature to the basking shark within the key sites, such as by-catch, ship strike (surface collision with craft) and disturbance.