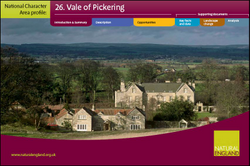 The Vale of Pickering is a low-lying basin of flat or gently undulating topography, lying between North Yorkshire’s uplands to the north, west and south, and the Scarborough coast on its eastern side. As such it has physical links with many surrounding areas, particularly through river catchments.
Parts of the coastal area are designated as being of European importance as a Special Protection Area (Flamborough Head and Bempton Cliffs for birds) and as a Special Area of Conservation (SAC) (Flamborough Head for its chalk cliff grassland habitats). The National Character Area’s (NCA’s) main river, the River Derwent, is also an SAC. The archaeologically important Star Carr site is recognised by English Heritage as being of national and international significance for its completeness of record of human habitation: the Vale of Pickering was occupied by Lake Pickering during the last glacial period so its ‘shores’ are rich in evidence of human use from this period.
Further information