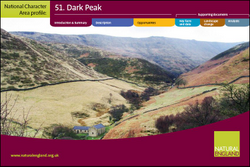 The Dark Peak is a landscape of large-scale sweeping moorlands, in-bye pastures enclosed by drystone walls, and gritstone settlements, within the Pennine chain. It falls almost entirely within, and forms a large part of, the Peak District National Park. Approximately 46 per cent of the area has been designated as a Special Protection Area and Special Area of Conservation, both being the highest forms of environmental protection afforded by European Law. Some 46 per cent of the National Character Area (NCA) has also been designated as Sites of Special Scientific Interest (SSSI) and the range of different SSSI, from the Eastern Peak District Moors to Chatsworth Old Park and clough woodlands to geological formations, demonstrates the variation
of important characteristics and landscapes within the NCA.
Further information