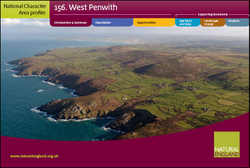 West Penwith is a sparsely populated peninsula, ringed by high cliffs and rising to high, rocky moorland at its centre. Also known as the Land’s End Peninsula, it is at the south-west extremity of England, surrounded on three sides by the pounding waters of the Atlantic Ocean and separated from the rest of Cornwall by a low-lying isthmus (land adjacent to the A30 between Hayle and Penzance). The area includes the fishing settlement of St Ives and a number of small villages which originated as fishing or mining settlements, but which are now popular tourist destinations. Access around most of the landscape is by narrow ancient lanes bounded by granite walls.
Cornwall Area of Outstanding Natural Beauty (AONB) accounts for 67 per cent of the area, with 37 per cent focused within the northern coastal area, identified as an Environmentally Sensitive Area. With over 800 ha of nationally and internationally important nature conservation sites, supported by a further 2,000 ha of high-quality UK Biodiversity Action Plan Priority Habitat, the area is a highly valued natural asset.
Further information