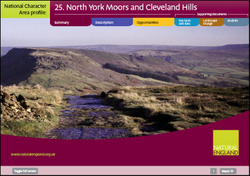 The North York Moors and Cleveland Hills National Character Area (NCA) comprises a well-defined upland area, rising from the Tees Lowlands to the north, the Vale of Mowbray and Howardian Hills to the west and the Vale of Pickering to the south. To the east it is bordered by the North Sea, the extensive stretches of high coastal cliffs exposing the geology that shaped these uplands. Some 85 per cent of the area falls within the North York Moors National Park.
Further information