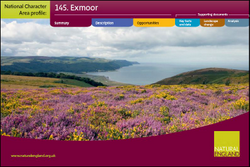 Exmoor National Character Area (NCA) is predominantly a landscape of upland plateaux of Devonian sandstones and slates terminating in the north at the Bristol Channel with a spectacular cliff coastline. It lies across the counties of Devon and Somerset. The Devonian geological time period was first described and recorded in association with this area. To the west the area terminates at Barnstaple/Bideford Bay and the Taw and Torridge Estuary and to the east at the Vale of Taunton Deane. The Exmoor area contains sparse settlement with centres at Braunton, Ilfracombe, Lynton and the western edges of Minehead, all associated with the coast, and inland at Barnstaple, Dunster, Dulverton and Bampton.
Further information