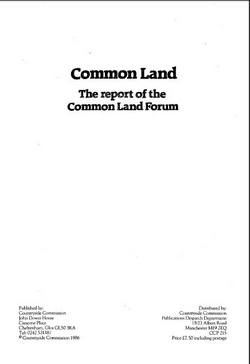 In 1983, the Countryside Commission set up the Common Land Forum to explore whether the main national bodies with an interest in common land could agree proposals for future commons legislation.

The need for legislation had been identified by the Royal Commission on Common Land, which reported in 1958. Legislation followed in 1965 to set up statutory registers of common land.

But the Royal Commission’s other main recommendations for legislation – to create public access rights on commons, and statutory arrangements for their better management – had not been implemented. The Common Land Forum agreed a detailed blueprint for this 'second stage’ legislation on commons access and management.

The Forum’s report was published in 1986. Although the report was never directly implemented, it remains an important influence on national and local common land policy.