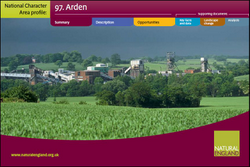 Arden comprises farmland and former wood-pasture lying to the south and east of Birmingham, including part of the West Midlands conurbation. Traditionally regarded as the land lying between the River Tame and the River Avon in Warwickshire, the Arden landscape also extends into north Worcestershire to abut the Severn and Avon Vales. To the north and northeast it drops down to the open landscape of the Mease/Sence Lowlands. The eastern part of the NCA abuts and surrounds Coventry, with the fringes of Warwick and Stratford-upon-Avon to the south. This NCA has higher ground to the west, the Clent and Lickey Hills and to the east, the Nuneaton ridge.
Further information