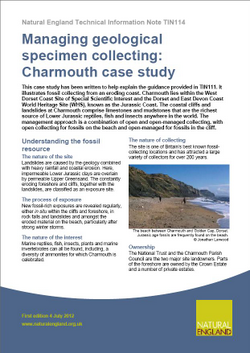 This case study has been written to help explain the guidance provided in TIN111. It illustrates fossil collecting from an eroding coast. Charmouth lies within the West Dorset Coast SSSI and the Dorset and East Devon Coast World Heritage Site (WHS), known as the Jurassic Coast. The coastal cliffs and landslides at Charmouth comprise limestones and mudstones which are the richest source of Lower Jurassic reptiles, fish and insects anywhere in the world. The management is a combination of open and open-managed collecting, with open collecting for fossils on the beach and open-managed for fossils in the cliff.