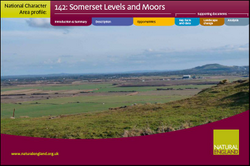 The Somerset Levels and Moors National Character Area (NCA) is a flat landscape extending across parts of the north and centre of the historical county of Somerset, reaching from Clevedon near Bristol in the north to Glastonbury in the east and Ilchester and Langport in the south. The Somerset Levels and Moors NCA is dissected by the Mendip Hills NCA and the Mid Somerset Hills NCA, notably the limestone ridge of the Polden Hills. The western boundary is formed by Bridgwater Bay and the Bristol Channel beyond. The landscape blends almost seamlessly into the Vale of Taunton in the south-west and into the Yeovil scarplands to the south. This is a landscape of rivers and wetlands, artificially drained, irrigated and modified to allow productive farming. The coastal Levels were once mostly salt marsh and the meandering rhynes and irregular field patterns follow the former courses of creeks and rivers. They contrast with the open, often treeless, landscape of the inland Moors and their chequer-board-like pattern of rectilinear fields, ditches, rhynes, drains and engineered rivers, and roads. Today, the Levels and Moors have many similarities but their histories are quite distinct. The Levels landscape was probably established by the time of the Norman Conquest while the Moors remained an open waste until enclosure and drainage between 1750 and 1850. Water is an ever-present element in the NCA; water from a catchment area four times the size of the Levels and Moors flows through the area, often above the level of the surrounding land. Much of the area lies below the level of high spring tides in the Bristol Channel.
Further information