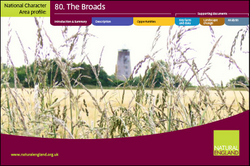 The Broads National Character Area (NCA) is situated on the eastern edge of East Anglia and is located predominantly in the county of Norfolk together with a small part of north Suffolk, between the peripheral urban areas of Norwich in the west and Great Yarmouth and Lowestoft in the east. Some 94 per cent of the NCA is open country and the remaining 6 per cent is urban.
Its boundary follows the edge of the level, open marshland and valleys drained by the three principal rivers, the Yare, Bure and Waveney, and their tributaries, the Thurne, Ant, Wensum and Chet, giving the NCA its very distinctive shape. The rivers flow east into the sheltered estuary of Breydon Water, which lies at the confluence to the Broads river system.
Further information